The fastest person in the world is Usain Bolt

Who is the fastest person in the world? Running a hundred-meter mark in 9.58 seconds can only person in the world - Usain Bolt( Usain Bolt), a phenomenal athlete. He is the fastest man who has now set a world record at a distance of 100 meters in the sprint( achieved in Berlin in 2009, surpassing his previous record of 9.69 seconds at the 2008 Olympic Games in Beijing).Its maximum speed during the sprint was 44.72 km / h .This is the maximum speed of a person, and it is impossible to maintain it for a long time. Bolt managed to develop such a speed on a segment between 60 and 80 meters, and at the last meters of the distance its speed has significantly decreased.

The speed of Usain Bolt, who was born in Jamaica in 1986, was seen at a young age. By the age of 15 he was known as "Lightning", thanks to his triumph in the World Junior Championship in 2002.There he won a 200 meter race, making him the youngest gold medalist among juniors in the world. Later that year, the International Association of Athletics Federations awarded him the "Rising Star" award. Today Usain tops the list of the 10 fastest people on the planet.

Despite some setbacks - in particular, a hamstring injury that did not allow him to compete at the 2004 Athens Olympics - Bolt soon took the world of sports by storm, winning three gold medals at the 2008 Beijing Olympics. This is the first athlete in the history of the Olympic Games, who won first place in both 100- and 200-meter relay races. He was able to run a hundred meters in 9.69 seconds, 200 meters in 19.30 seconds, as well as the baton 4 by 100 meters for 37.10, beating previous and Olympic and world records. And like "cherry" on the cake: Bolt is the first person to set three world records during one Olympics.

Sprinter defended his title "the fastest man on Earth" at the 2012 London Olympics, becoming the first man to win gold medals in a hundred-meter( 9.63 seconds) and two hundred meters( 19.32 seconds) in two Olympic games in a row. At the same Olympics, he and three other members of the Jamaican team set a new world record in the relay 4 to 100 meters( 36.84 seconds).After the relay was over, Bolt argued with one of the judges. The latter took the baton from the athlete, which he wanted to receive as a souvenir. However, later, Bolt still received a wand as a gift.

It would seem that the limit of success is achieved, but the 29-year-old Bolt is too fast to stand still. He again entered the history of sports in 2016 after winning the third consecutive gold medal at a distance of one hundred meters in his final( supposedly) Olympic Games in Rio.

The fastest woman in the world

If Usain Bolt is the fastest man in the world, then who is the fastest woman? This is a resident of the USA Florence Delores Griffith( Joyner), known to fans as Flo Joe.

The seventh child in a large family( there were 11 children in total), brought up by a divorced mother. Florence was remembered not only with her current world records at 21.34 seconds at a distance of 200 meters and 10.49 seconds in the footsteps of a hundred meters , but also with a quivering attitude to her own appearance. This is the first woman sprinter, which appeared on the treadmill carefully painted, with a beautiful manicure and in bright form. In the sports world, Florence has become a true style icon. 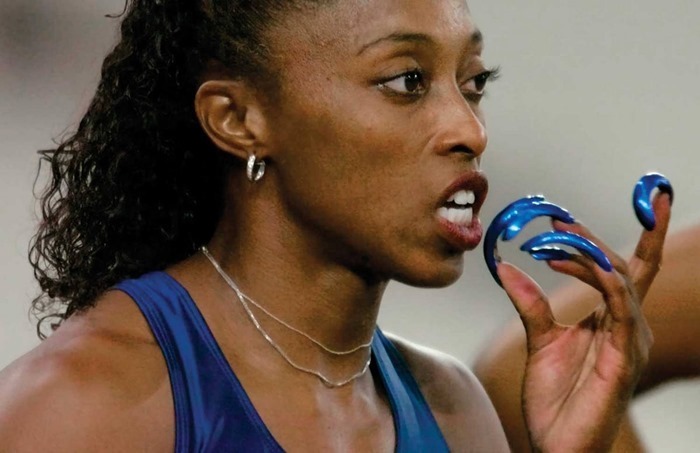 The main rival of the Bolt

Usain can be insanely fast, but it is not the fastest on our planet. This honor belongs to a cheetah( Acinonyx Jubatus), a graceful predator living in Africa and Asia. These endangered members of the cat family can ride at speed, the exceeding 120 km per hour , and are capable of accelerating from 0 to 100 km per hour in three seconds. This is the level of Bugatti Veyron.

So the cheetah can easily overtake Usain, but after a couple of hundred yards the animal will start to run out. With enough foresight, Usain will be able to overtake him. .. probably.