On March 7, the Shrove week began - a holiday in which the popular consciousness fancifully mixes Christianity and half-forgotten ancient pagan rites. How to distinguish one from another and why exactly pancakes are described in our list of top-10 facts about Maslenitsa .

In the church calendar there is no name "Maslenitsa" - there is "meat" or "cheese"»Seven. The beginning and the end of it are determined by the date of Easter and change every year, although they depend on the date of the vernal equinox. In fact, Pancake week is the last chance for orthodox people to eat properly before a long, harsh fast.

The name "Maslenitsa" appeared only in the 17th century. In general, as they just do not call it - and "Pancake", and "The Gluttonous Week", and "Milkmaid", and "cow and horse festival" and so on. But most of all we like "The Kisser". 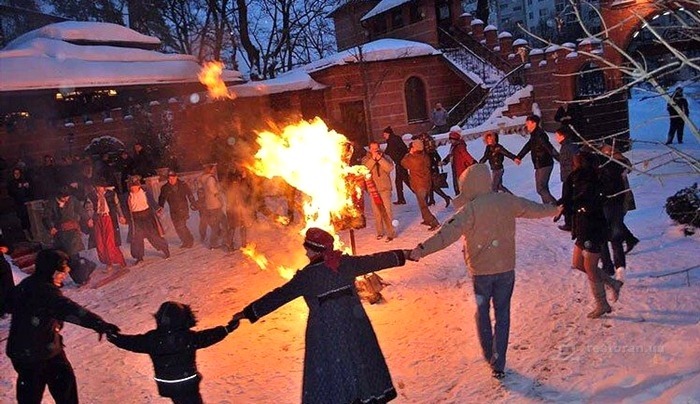 Folk Carnival absorbed much of the ancient rituals of winter wires. Some believe that some of the Maslenitsa rituals-entertainments were borrowed from the winter holiday, dedicated to Volos - the deity of fertility of land and livestock. Others believe that Maslenitsa is one of the names of the goddess Lely, daughter of Makoshi, who, together with her sister Lada, answered for love and fertility. And still others look for the sunny roots in Pancake week - in fact at this time the ancient Slavs celebrated the spring equinox, the boundary between winter and spring and the beginning of the new year. 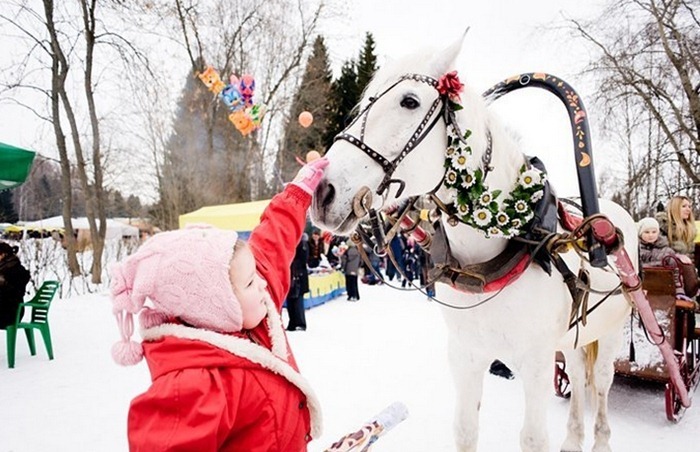 Despite the popular belief, pancakes have never been in Russia a solar symbol. Pancakes from the Slavs - the traditional element of the funerary meal( because the ancestors were responsible for the fertility of the land, they should have been properly cajoled).And from the rituals of commemoration of the dead in Pancake week included fist fights, jumps and plentiful feasts, once a memorial.

6. Who are the pancakes? 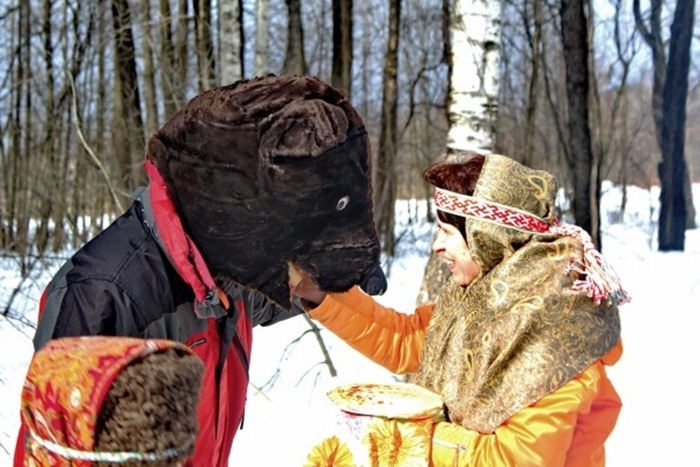 Which mistress did not experience sad moments, when the first pancake, poured into a frying pan, went in creases and gathered in an ugly pile."The first pancake is lumpy!" She sighs. But in fact, not than( the "lump"), but to whom( "coma")."Com", i.e."Standing on the hind legs" - one of the nicknames of the bear among the Slavs. For the land to be fertile, the cattle gave birth, and the bears lived in the forest and did not touch people, the ancient Slavs, and brought the first pancake to the clumsy sacred animal of the god Veles. 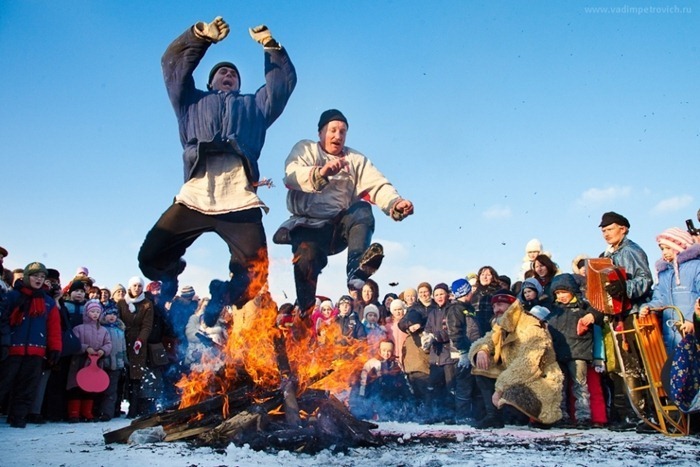 Everyone knows a sad story about a snowy girl - Snow Maiden, who so wanted to live among people. And although she was not bloodthirsty, but dead among the living is not the place, so the poor girl melted during the traditional Maslenitsa rite - jumping through the fire. So the ancient Slavs recognized the undead, wandered to them accidentally or with villainous purposes. 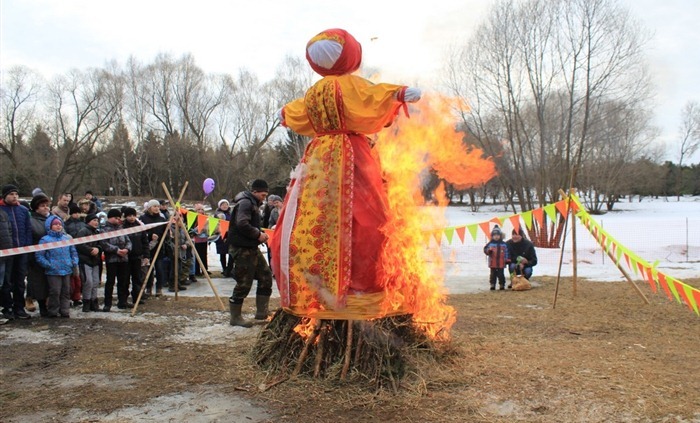 At the end of the gluttonous week, a procession of mummers, bursting into tears for funerary songs, carries a straw dummy on stretchers, which( sometimes after the scene of the trial) is then burned, so that the next year will be fertile and lucky. But once a scarecrow was not a scarecrow at all. 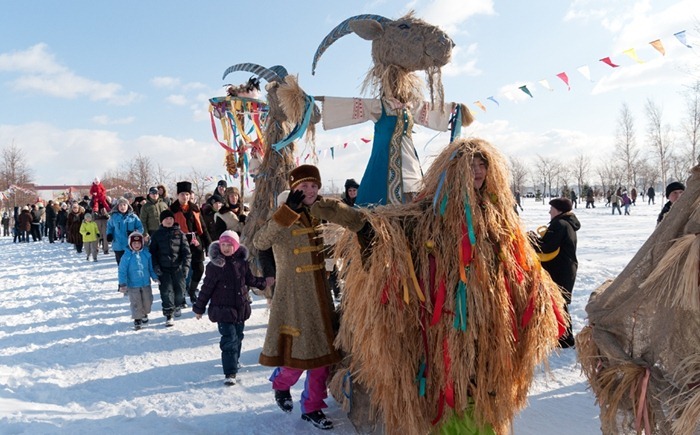 The mummified perform another important role in Maslenith mythology - they drive away the winter, diseases and evil spirits. Young guys wear masks, fur coats inside out and bypass the neighborhood, ring bells, twist ratchets, or simply and uncomplicatedly yell at the top of their voice. 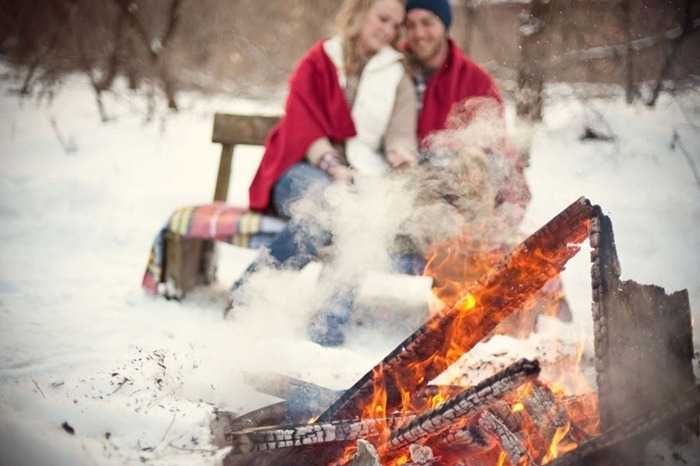 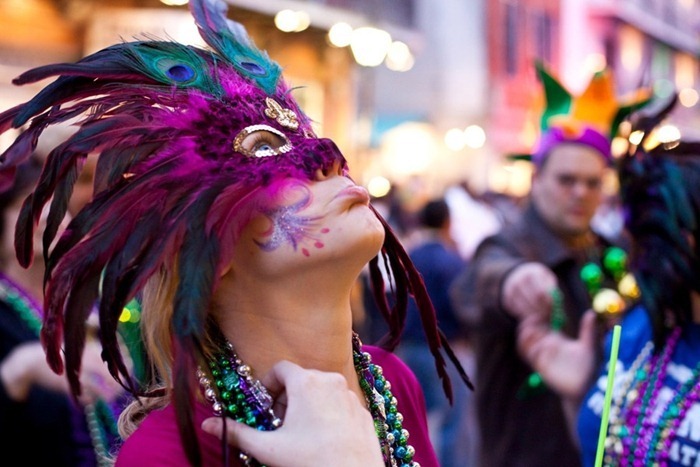 There is another analogue of Maslenitsa in other countries. On the last day before the Great Lent, the prickly Britons arrange pancake relay races - races with a hot frying pan in hand, on which lies a pancake. And it must be thrown! In Germany, they celebrate "Fastnacht", crowd dressed in the streets and everyone drinks beer and mulled wine. In the Scandinavian countries during the "Vastavlya" children in carnival costumes walk the streets, ask passers-by and neighbors for sweets. And the famous Orleans "Mardi Gras" is still the same Shrovetide carnival.

How to make shelves on the balcony with your hands cheap and beautiful? May 9, 2018

How to glue rhinestones on a swimsuit for rhythmic gymnastics? March 22, 2018