The fastest person in the world is Usain Bolt
March 22, 2018

The highest mountain in Hungary is Kekesh
March 22, 2018

Gamirasu Cave Hotel is one of the most amazing hotels in the world, offering five-star service to tourists when staying in a real cave. Gamirasu Cave was opened in 1999 on the territory of the former Byzantine monastery in the Turkish region of Cappadocia, 300 km from Ankara. In Cappadocia, the mass of cultural and historical attractions: the famous underground cities and centers of ceramic art. Human settlements in the local caves appeared in the fifth millennium BC.In Cappadocia, tourists from the coast of Antalya often come on excursions. And to imbue with the local atmosphere and literally merge with the mountainous terrain of the area, you should definitely stop for the night in a real cave town. Moreover, the hotel is located in the heart of Cappadocia, in the town of Ayvali in the resort of Urgup. Originally, 18 small natural caves housed the monks' monastic cells, today they are converted into rooms with all amenities. Some of the rooms are located in an external building, made up of local volcanic rock. 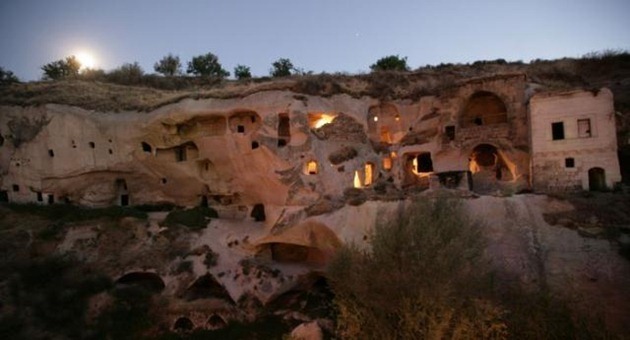 The most unusual hotel in Turkey has rooms of several categories: "standard", "deluxe" and eight suites.

The night in a standard room costs about $ 90.For this money, guests of the cave apartments receive an ascetic room with a bed carved out of stone, a bathroom, a hairdryer and a telephone. Such cells are in demand among those who want to fully penetrate the atmosphere of the old monastery, without denying themselves, however, in the usual conveniences.

Room category deluxe is 110-130 dollars per day and has a stone terrace overlooking the valley.

Multi-room suites are equipped with a hydromassage bath, minibar, LCD TV and dvd player. The night in them costs from 150 to 350 dollars.

The most luxurious room of the Eagle Nest Deluxe Suite has a fireplace, bathroom with Jacuzzi, sauna, minibar and other amenities. It is worth such a cave luxury of about 1000 dollars per night. 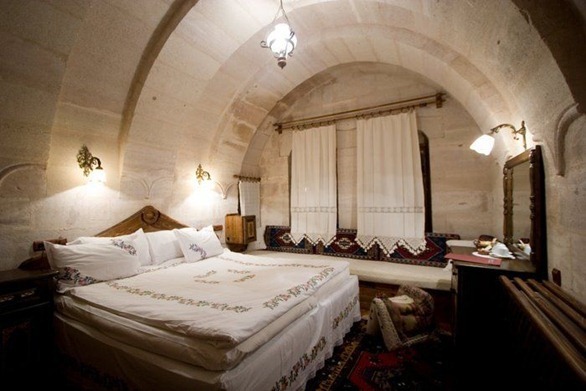 The walls of many rooms have preserved frescoes, painted by monks a thousand years ago. The rooms are decorated with Oriental style: carpets, textiles and handmade vintage handicrafts.

Any of the rooms Gamirasu Cave strikes with absolute noise insulation. The volcanic rock, in which the caves appeared, perfectly protects against external noise. In addition, the caves have a fine microclimate: in the summer it is cool, and in winter it is always warm. However, the rooms are equipped with central heating. 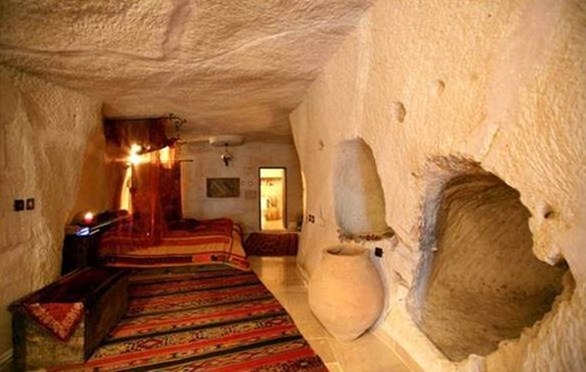 The hotel has a restaurant, an outdoor swimming pool, and near the entrance to the caves there is a picturesque garden. Gamirasu Cave is served as a half-board. For breakfast guests are offered a familiar buffet, and dinners are held in a traditional style and include six meals.

For those who are afraid of losing communication with the surrounding world, the hotel has Wi-Fi. Those who are on the contrary striving to renounce reality can attend the Sufi rite - the traditional dance of strolling dervishes.

Gamirasu Cave is very popular among exotic fans, as well as those tourists who just want to relax from the hustle and bustle.

Often in Gamirasu Cave come to celebrate the wedding. After all, the wedding can be held in a nearby Christian monastery.

Thirty rooms of Gamirasu Cave are painted for many months ahead, so the room in the of the most unusual hotel in Turkey should be booked in advance.

Bed-transformer: review of models and types of 75 photos October 3, 2019

How to arrange the furniture in different rooms correct and comfortable October 5, 2019

Children's furniture for a small room: ideas for zoning October 6, 2019