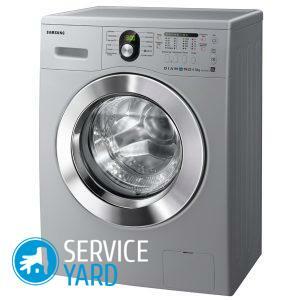 scum. Despite the fact that the washing unit seems to you prohibitively complicated, you should not be afraid of self-repair of this "monster".Everything is not as difficult as it may seem from the very beginning. On the Internet there is a lot of information written in the language, understandable even to an inexperienced newcomer. Having carefully studied the instructions to the washing machine, information in special articles and thematic forums, you can cope with simple breakdowns and yourself. If the incorrect operation of the device is caused by a factory fault or a malfunction in the program control, then it is better to contact a service workshop whose employees will professionally repair Samsung washing machines. You yourself are unlikely to cope with such problems.

Reasons for the incorrect operation of the washing machine

The most common problems with the Samsung brand washing machine are as follows.

Water heating does not occur

There are several reasons for this, however, in about 95% of cases the problem is in the failure of the heater. The remaining 5% is due to an open in the power supply circuit or breakdown of the control unit.

Water is not poured into the

tank. And if there is no pressure, then there is no water. Often, water does not come because the machine is faulty, but because you forgot to open the tap, designed for water supply.

If the water stops flowing after the unit has been running for a while, it is a signal that the filter is clogged and needs to be cleaned.

Water is collected in the tank and immediately merged

The reason for the sink is the wrong connection of the washing machine to the sewer. It is not necessary that the problem should be announced immediately after the stylalka is connected.

A seeder can also take place when the control system fails. Finding a malfunction in this case is no less important than eliminating it.

The appearance of water under the washing machine

Analyze what exactly you erased. If the tulle curtains, then there is no reason for concern. Synthetics almost does not absorb water. In addition, when washing curtains formed a lot of foam.

Often the reason for the appearance of water under the washing machine is the poor condition of the hose laying. It needs to be replaced, and the problem will be eliminated by itself. If the cause of the leak is broken drum, cuff or branch pipe, then the device needs a serious fix. Repair of the washing machine "Samsung" with their own hands is impossible. I'll have to contact the service center.

No discharge of water

As a rule, the reason is in the clogging of the drain pump filter. If you clean the filter regularly, then you can avoid this problem completely. If this rule is ignored, the contamination of the filter will inevitably lead to a breakdown of the drain pump. In this case, you will have to purchase a new pump.

Problems with the inclusion of

Often the matter is in ordinary forgetfulness or lack of electrical power. Banal inclusion of the device in the network and proper selection of the parameters of automatic protection will help to eliminate this problem.

It is possible that the control unit does not work and professional repair of washing machines "Samsung" is needed.

Noise and knock when operating the

. This happens if a foreign object enters the tank. Another reason is the uneven distribution of things in the drum. The machine operates with noise when the bearings are faulty or if it is incorrectly installed.

to the table of contents ↑

Washing machine Samsung S821, repair by yourself: order of dismantling

For self repair of the machine you will need the following tools:

To assemble the washing machine "Samsung", you must perform the same actions, but in the reverse order. 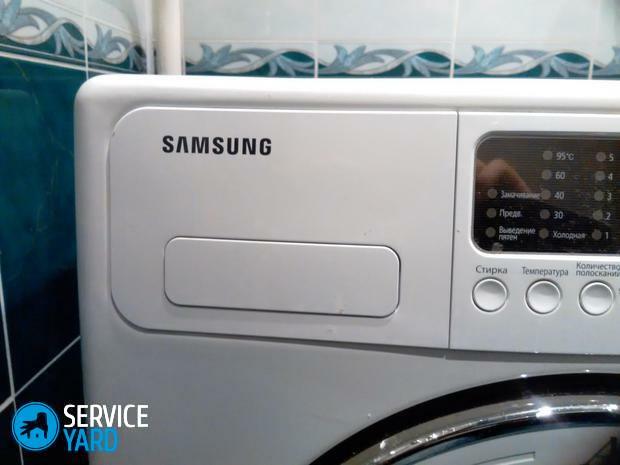 Burning TEN is one of the most common faults. This is especially true for regions with hard water, as a result of which a large amount of scale is formed. Replacement of TEN is an operation that is not very labor intensive. The algorithm is as follows:

How to replace the pump

A pump fault is one of the most common faults. Often, repairing the washing machine "Samsung" with their own hands is reduced to its replacement. Replace the faulty pump with a working one in the following order:

If the pump still needs to be replaced by a working one, the following procedure is as follows.

We get rid of the descaling

If you look inside the washing machine that has been working for a long time, you can see a dirty gray coating. It is hard to the touch, so rags and detergents here will not help.

Important! The main problem is that pollution accumulates gradually, gradually. And one day the washing machine breaks down, which is fraught with expensive repairs. If time to take action, then troubles can be avoided.

Rigid water is saturated with calcium and magnesium salts. When heated, a reaction takes place with the evolution of carbon dioxide and the formation of a solid precipitate, which solidly settles on the tank and the TEEN of the washing unit. Metal, covered with a crust of scum, less conducts heat. Hence - increased electricity consumption. At the same time, the mud contained in the water clogs the intake valve, the components of which wear out prematurely.

Important! The largest amount of debris and dirt penetrates into the machine after turning off water or repairing.

Timely taking measures will avoid repairing the Samsung S821 washing machine by oneself or by contacting a service center.

Let's consider the most widespread ways of struggle against already formed scum and ways of preventive maintenance of calcareous adjournment.

One of the most common, affordable and effective tools is the so-called "Antinakipin".Pour the product into the machine and turn on the washing mode without laundry. The chemical compound reacts with the substances forming the scale and quickly removes the styar from the misfortune. Paraphrasing A. Raikin, "cheap and angry," otherwise you will not say.

Important! However, this method is not without drawbacks:

However, this problem solves the problem of scaling cardinally. By the way, we should not confuse "Antinakipin" with water softening agents. The last certainly from the gray raid the machine will not be relieved.

If you use washing machines quite often, then you should wash it once every 3 months. With occasional washings, cleaning is sufficient once every six months.

Important! The method is effective and inexpensive, besides, it allows you to get rid of extraneous odors( if any).Any harm to the details of the device such cleaning will not do - it is checked by repeated practice.

According to experts, it is the cleaning of the machine from scaling with white vinegar is the most effective. The procedure is as follows:

This activity is not intended to eliminate, but to prevent the appearance of a layer of solid deposits. Helps in this application of magnetic water softeners. They can be put on both the hose of the stylalki, and at the entrance of the water pipe to the apartment.

The essence of this softening is the purification of water from calcium and magnesium ions. There are no these ions - there is no problem. Neither on the tank nor on the TAN scum appears.

Important! The downside of this method is the high cost. Of course, the packet of "Antinakipin" is much cheaper, but the magnetic device is not capable of damaging the washing machine, and its working life is measured in tens of years.

In addition to magnetic filters, mechanical devices are also used to purify water from rust and sand. They prevent pipe clogging and save appliances from damage. By the way, and the plumbing in the presence of such filters is much longer.

Well-known fact: the higher the temperature for washing you use, the faster the raid is formed, and the more likely it is that you will need to quickly repair Samsung washing machines. Manufacturers of modern SM models take this fact into account, equipping their products with innovative programs. Now you can wash clothes at a temperature of 40 to 50 degrees - no more. The quality of washing does not suffer at all.

Important point - the use of high-quality detergent. The use of cheap counterfeit products often leads to breakage of styarok.

As you can see, self-repair of washing machines "Samsung" is a very real thing. In particular, when it comes to typical, common breakdowns. However, for faults, the cause of which could not be identified, it is advisable to contact a professional service center.

💦 Penetrating Concrete Waterproofing: how to use? October 12, 2019

How to adjust the plastic balcony door video and tips October 12, 2019

Tennis tables: how to choose the types, manufacturers, specifications October 16, 2019