Rating of cities with the longest traffic jams
April 7, 2018

Rating of the best radar detectors

Contrary to popular belief, a radar detector is needed not only for motorists who often break the rules. After all, even a disciplined car enthusiast can sometimes automatically add speed, for example, getting out of a long traffic jam. And here comes to the rescue an anti-radar, giving a warning signal.

Modern radar detectors are able to recognize the map of the area using GPS, change the sensitivity in the city and on the highway and even get information about high-speed restrictions on the road. It is important that the device does not squeak constantly, distracting the driver with false alarms and unnecessary warnings. The most worthy models from among the presented on sale included in our the rating of radar detectors , compiled on the basis of tests conducted by experts of the publication "Behind the wheel".

The updated anti-radar rating of 2016 includes the top 5 models according to buyers' reviews.

The lack of a GPS module prevented the line higher than this model. The device did not recognize the laser speed meter, reacted to the rest of the radars a little later than the other dozens of participants. The advantages of the model include a good screen, a comfortable volume control and a low price - 3120 rubles, thanks to which the MRD-410VS is the best radar detector in terms of price-performance ratio in our rating.

The most expensive radar detector in the rating is 10 000 rubles. For these considerable money the user receives a decent technical stuffing, but using the device is not very convenient - the management of functions and sound is confusing and incomprehensible. Although the detection of radars at a sufficiently high level with the exception of a laser speed meter.

The main disadvantage of the model is the lack of GPS.In the rest for 2500 rubles the user receives a good display, convenient management, fast loading. The instrument recognized all the speed detectors except the laser.

This model is able to change the sensitivity depending on the current speed. In the zone of the Avtodoriya complex, the device indicates the permitted speed. The disadvantage is the unsuccessful screen, as well as the speaker located on the bottom wall of the device. The price of a radar detector is about 5,000 rubles.

The device has GPS, the ability to adjust the speed threshold, the manufacturer's website has software updates. Experts noted frequent false alerts about the laser speed detector. The price of a radar detector is about 9,000 rubles.

The device is characterized by good informativeness, comfortable volume control, good sensitivity. The laser detector did not catch the detector, the experts also noted that when leaving the area of ​​the Avtodoriya, the device did not display an alert. The price of the detector is 4,300 rubles.

Experts noted a convenient update, numerous settings for the thresholds of operation, an excellent definition of all radars except laser. Only the case made of cheap plastic is unsuccessful. The price of the detector is 4,300 rubles.

The device's advantages are a rich set of settings, easy software updates, excellent sensitivity. The overall impression is spoiled only by the glistening plastic case in the windscreen. The price is 3 900 rubles.

The device detects all the meters except the laser. Settings allow you to define the required high-speed thresholds. On technical characteristics, this model was ahead of all. The detector received the second position for not the most successful screen. The price is 4 700 rubles. 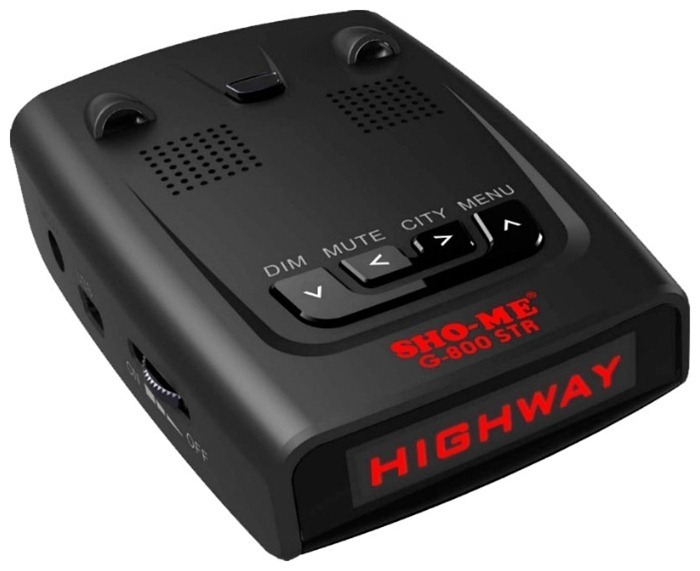 The best radar detector sees all the speed detectors except the laser. Settings allow you to change the sensitivity, set the speed thresholds, mute the sound, compare the current speed with the limit indicated in the database for the specified section of the road.

The price of the radar detector is 4 750 rubles.